We believe that through our commitment to Christ and His teachings, we continue His ministry of hope and healing to those in need.

At Catholic Charities of Southern Missouri (CCSOMO), we are a people of faith who seek to empower those in need to reach their emotional and economic potential.

All of us—staff, Board members, donors, volunteers, and those we serve—are members of the same team. We work together towards a common goal of strengthening families and guiding those in need on their path to self-sufficiency and rebuilt lives. 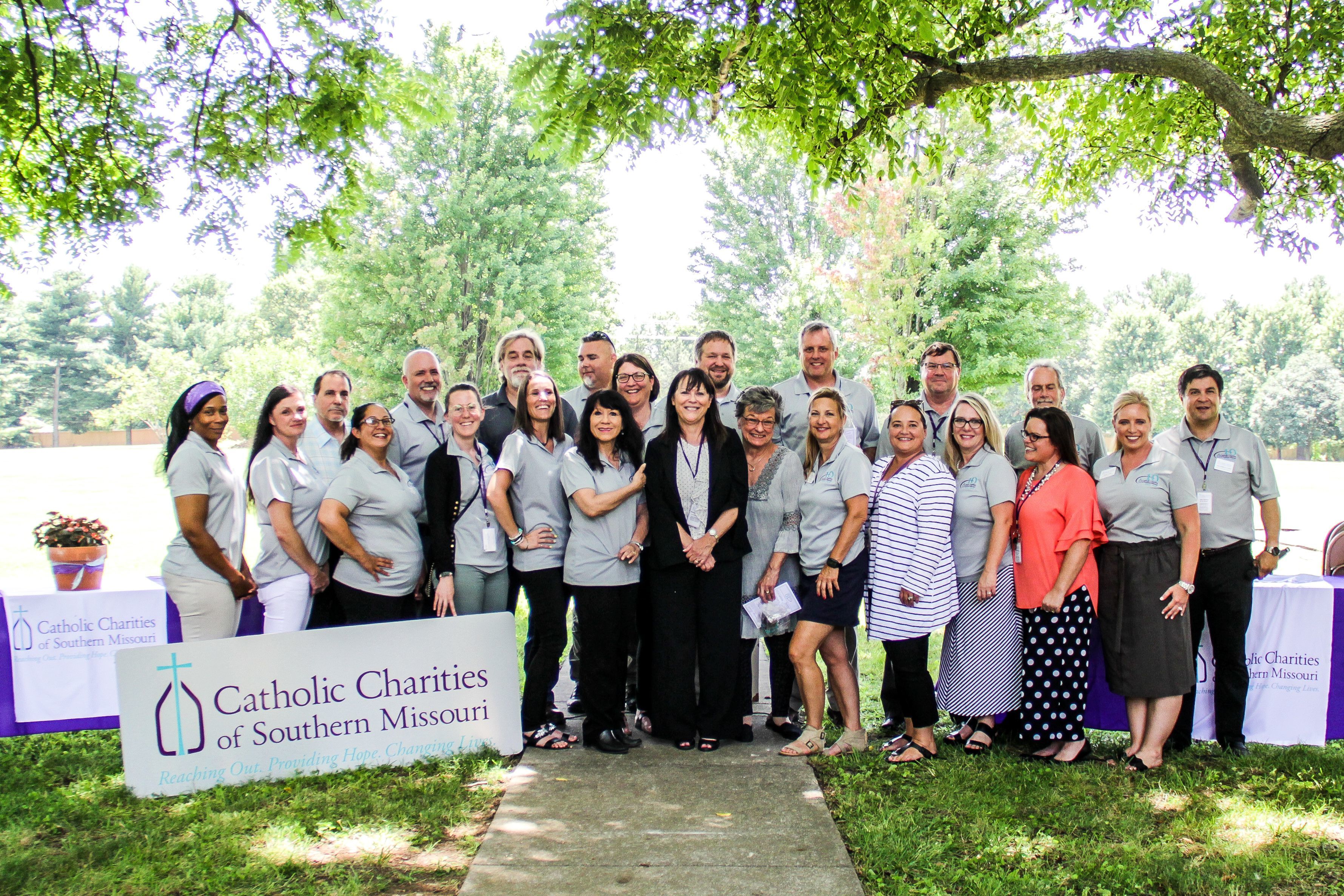 As Catholics, we affirm that all life is sacred because all life was created by God in His image and likeness. Our faith also challenges us to be particularly concerned for the most vulnerable among us. To follow Christ is to reach out in compassion to those in need.

It is very important to note the term 'Catholic' does not place limitations on whom we serve. The parable of the Good Samaritan challenges us to think of everyone as our neighbor. CCSOMO serves people in need without concern for church membership or faith. Typically, more than 90 percent of our clients are not Catholic and some do not claim any faith. We do not proselytize.

And finally, the term ‘Catholic' does not imply that CCSOMO will only hire Catholics. The values we hold dear as Catholics are also basic Christian values, and in a broader sense, basic human values. CCSOMO invites men and women who share our values to join us in our mission to serve others. 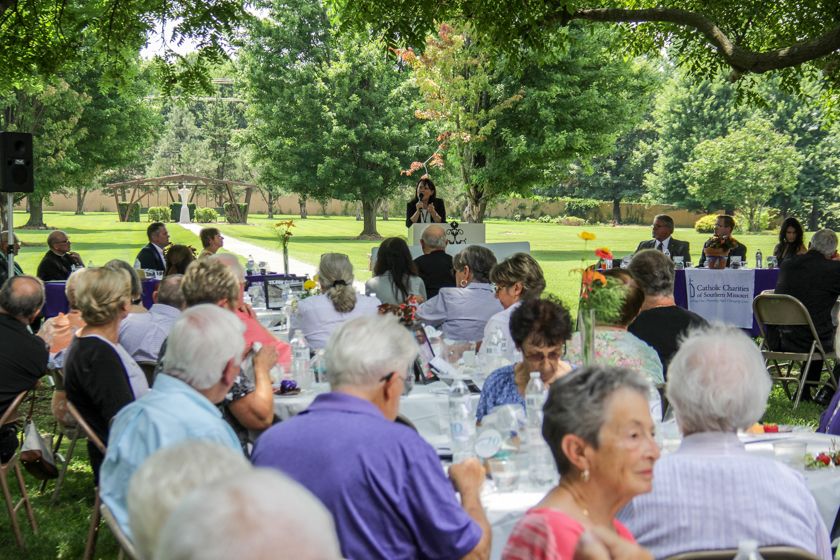 CCSOMO Executive Director Maura Taylor speaks to an assembled crowd about the agency's history on the occasion of the tenth anniversary of its incorporation on the Monastery office grounds in Springfield, July 24, 2019. PHOTO: John Farmer de la Torre/CCSOMO 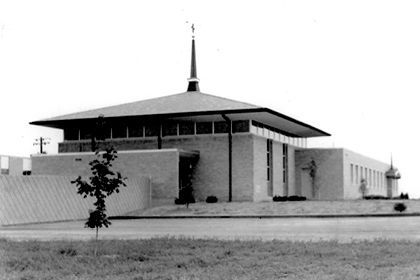 Catholic Charities of Southern Missouri has its administrative office at this former Carmelite monastery, pictured here shortly after it was constructed. PHOTO: Archive photo / Photographer unknown.

2009 - The Dream of a Local Catholic Charities Ministry is Realized

Catholic Charities of Southern Missouri (CCSOMO) is a faith-based 501(c)(3) agency established on July 24, 2009 and governed by a Board of Directors.

When Catholic Charities of Southern Missouri was established, there were two employees and two offices, one in Springfield within the Catholic Center which housed the Bishop’s offices, and another in Cape Girardeau.

In 2011, with the support of the local Catholic community, the diocese of Springfield-Cape Girardeau, and our network of Catholic Charities organizations, CCSOMO faced the unprecedented natural disaster of the E-5 Joplin tornado. CCSOMO suddenly became a vital source of help for those who lost everything. This event also marked a long period of unprecedented growth, creativity, and specialization. Within a year, CCSOMO became the largest provider of Disaster Case Management in the state of Missouri. One decade later, CCSOMO continues to be a leader in this field.

The Joplin disaster also revealed the great need for home repair and rebuilding. Consequently, CCSOMO launched a new program named Rebuilding Homes/Rebuilding Lives. Ultimately, CCSOMO utilized thousands of volunteers in Joplin to repair 250 homes and completely rebuild 15. The agency was also active with other efforts. GoodFinds Thrift Store was opened in Joplin and became a source of direct assistance for clients. Following extensive flooding in southeast Missouri, CCSOMO opened an office in Van Buren in November to bring its disaster response work to that area of the diocese, along with its home repair program.

2012 - New Programs and Services for Mothers and the Homeless

In 2012, an office opened in Sikeston and we began offering a Pregnancy and Parenting Support Program (named Healthy Moms/Healthy Babies Program). Eventually, the Home Repair program was expanded beyond disaster situations to include needed repairs for seniors in Cape Girardeau County, and for low-income families in multiple regions.

CCSOMO’s Housing Assistance and Homelessness Prevention Program grew out of our work with disaster survivors who were displaced from their homes. Eventually, this program expanded to cover all of southern Missouri and reach all those struggling to find and sustain housing. In line with our goal of helping clients achieve self-sufficiency, we also added a Housing and Financial Counseling Program.

In 2013, CCSOMO adopted its tagline “Reaching Out, Providing Hope, and Changing Lives.” “Reaching Out” was especially chosen given the nature of our service area: geographically expansive (covering 25,719 square miles), largely rural with little public transportation, and with many areas of intense poverty. CCSOMO quickly recognized that to effectively offer our services to those most in need, CCSOMO must travel to our clients, not require clients to come to us.

When the need arose in two counties for an agency to assume the work of Support Coordination for Individuals with Developmental Disabilities, CCSOMO stepped up, beginning the program in April 2013 in Scott County and later expanding it to Cape Girardeau County.

LifeHouse Crisis Maternity Home was launched on December 27, 2013, when an empty Carmelite Monastery in Springfield became available. It was quickly identified as a perfect answer to the needs of homeless, pregnant women. At that time, our offices in Springfield were still located in the Catholic Center but we were quickly outgrowing the space. CCSOMO’s home office was moved to one area of the monastery and the remainder became the crisis maternity home, LifeHouse.

2014 -A New Program for Veterans and Their Families

In late 2014, Catholic Charities of Southern Missouri launched its Support Services for Veteran Families Program (SSVF) targeting homeless veterans and veterans on the verge of homelessness, along with their families, respectively. This program is offered throughout the diocese except in Greene, Christian, and Webster counties where The Kitchen, Inc. of Springfield provides similar services to veteran families. The program is closely aligned with Catholic Charities of Southern Missouri’s overall emphases on helping individuals and families who face housing crises and moving our clients toward self-sufficiency.

Due to growth of the SSVF program growth and staff expansion, an office opened in Poplar Bluff in 2015 to server more veterans and their families.

Secondary offices were required in both Cape Girardeau and Springfield, for a total of nine office locations serving southern Missouri.

2017 - Launch of a New Workforce Development Program in Joplin

Catholic Charities of Southern Missouri reached out to Joplin again with its Construction On-Job-Training Program launched in February. The program builds on the knowledge and experience the ministry gained from its Home Repair and Rebuilding Program.

2018 - Acquisition of Consumer Credit Counseling Service of the Ozarks

In 2018, Catholic Charities of Southern Missouri acquired Consumer Credit Counseling Service of the Ozarks in Springfield (CCCS), as part of the ministry's social enterprise initiative. CCCS is a 501(c)(3) agency that provides debt management and financial wellness programs. Catholic Charities of Southern Missouri's mission is to lead clients to self-sufficiency whenever possible. CCCS services are seen as contributing to that mission and the ongoing endeavor to serve clients’ needs for overall wellness.

The agency continues to grow as it enters its second decade of operation. On July 24, 2019, CCSOMO celebrated its tenth anniversary and service to more than 30,000 clients since opening. Late that same year, CCSOMO was accredited by the Council on Accreditation. Their COA seal of approval recognizes CCSOMO’s use of best practices for nonprofit charities. COA accreditation also facilitates grant funding and is signal to the world of CCSOMO’s long-term viability.

The COVID pandemic has challenged CCSOMO. Agency leadership committed from the beginning of the pandemic to staying open to serve clients while protecting their health and that of employees. As of the one year anniversary of the pandemic in March 2021, CCSOMO has been fully operational with no interruptions to service.

Catholic Charities of Southern Missouri is named by the Springfield Business Journal as its 2021 Charitable Nonprofit of the Year. The award given on July 29, recognized the work of the ministry during the 2020 pandemic year. This award in 2021 is especially significant given it comes during a time when so many outstanding nonprofits are doing incredible work to help people respond to the COVID-19 pandemic.

Catholic Charities of Southern Missouri begins a capital fundraising campaign to build a new LifeHouse crisis maternity home in Cape Girardeau. Construction of LifeHouse Cape Girardeau is slated to begin in 2022 and its doors are scheduled to open in 2023.